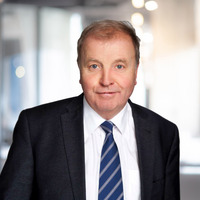 Fredrik Huseby has extensive experience with representing landowners in expropriation cases. He represents both businesses and private persons who have had to relinquish all or parts of their property. Furthermore, he has long and broad experience with real estate development and the administration of residential and commercial properties.

Fredrik has assisted landowners in a number of major expropriation cases, such as the construction of the international airport at Gardermoen, the modernisation of the Vestfoldbanen railway, and the rebuilding of the Dovrebanen railway and the E6 highway to Hamar. Furthermore, Fredrik has represented neighbours of airports who have been exposed to loud noise and other proximity disadvantages. In recent years, he has assisted homeowners and businesses that have had to relinquish their properties in connection with the development of the E18 highway through Bærum. In this context, he has litigated several cases before district courts and appeals courts on issues of compensation for residential properties and commercial properties. Fredrik heads the E18 team for Brækhus, which primarily consists of landowners who have been affected by the construction of a new E18 highway in Bærum municipality. He has also assisted a number of landowners and business owners who have been impacted by the construction of the new Follobanen railway.