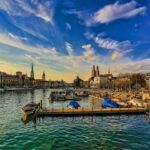 END_OF_DOCUMENT_TOKEN_TO_BE_REPLACED

Firms in the Spotlight... Lenz & Staehelin

While Lenz & Staehelin is acknowledged by most as Switzerland’s leading law firm, its connections and expertise span the globe. View Profile...

MLL is a full service law firm specialized in representing and advising clients at the intersection of high tech, IP rich and regulated industries. View Profile...

The legal market in Switzerland remains stable. As a result of the country’s decentralised structure, there are a number of key business hubs across the country. In the French-speaking part of Switzerland, Geneva stands out as an arbitration hub and remains well known for private banking, as well as for work in the sports sector, due to the presence of a number of governing bodies. Firms in Zurich, as well as Bern and Basel, are best known for their strength in corporate, M&A, real estate and capital markets, where they are instructed by domestic as well as a growing number of foreign companies and investors. Zug is endearingly described as Europe’s Silicon Valley, with considerable activity in the blockchain and bitcoin space, while Lugano is conveniently located for clients from central and southern Europe.

There has been no sign of a slowdown in the market and firms have reported seeing a spike in instructions to provide advisory support, as well as assistance with the newly introduced Federal Act on Tax Reform, which was approved by popular vote. The act is twofold in its objectives: aiming to secure Switzerland’s long-term future as an attractive jurisdiction – from a tax perspective – for global corporations, while simultaneously restoring international acceptance of the Swiss tax system and securing an appropriate level of tax revenue. Firms have also reported an increase in mandates related to the Financial Services Act and Financial Institutions Act, both introduced in 2018.

On the data privacy and data protection front, there has been some movement away from GDPR-aligned and regulatory-based work towards high-stakes disputes in the space. However, compliance and regulatory matters are increasingly important in the fintech sector, where there is a ever-growing need for clients to keep up-to-date with the latest FINMA and LIBRA regulations. There has also been a vast increase in the number of ICOs, as well as start-up companies requiring legal services as they look to establish themselves in the Swiss market as well as abroad.